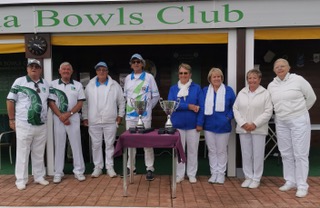 Historic Win For Mijas BC Duo 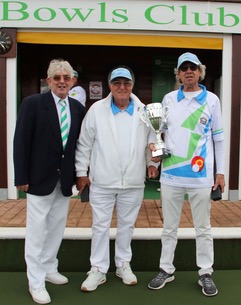 This competition saw an historic FIRST for Lawn Bowls in Malaga as Mijas Bowls Club's all Spanish duo of Juan Abeal and Manolo Suarez lifted the Men's 2 Bowls Pairs title at La Posada. Their win saw the first ALL SPANISH TEAM win a major Competition in the Province.
Winning 19-10 with 2 ends to spare and no longer mathmaically possible to lose the game, the margin of victory did not do justice to the competitive nature of the game with both teams playing at a high level. Both Leads played extremely well in a tough tussle at the front end.
Whenever Trevor won the battle of the leads, Juan was able to draw in to limit the losses or overturn the shot lie to keep up the pressure and the Spanish duo were never behind at any stage in the match.

In the Semi-Finals Juan and Manolo had survived a last end shoot out against a strong La Posada team when Jeff Rowe and George Hambling staged a strong fight back to 13 - 13 going in to the last end and it took a good draw from Juan to overturn a three shot game winning lie for the home side to win the game.

Robert and Trevor had won through in a last end decider in the morning semi against another Lauro team of Ron Jones and Julian Thomas with Trevor again at the forefront putting pressure on throughout the game. Despite some consistently good draw bowling from Ron Jones, Trevor and Robert went into the last end with a 4 shot advantage which proved inmpossible to overcome. 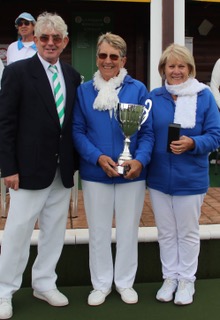 In the Ladies Final the Santa Maria pair of Barbara Land and Mary Detheridge beat Saydo pairing of Lesley Bell and Pat Baker 19-10 with 2 ends to spare. The encounter was very much a "game of two halves" with the early stages seeing Lesley and Pat holding a lead right up to the 9th end, before the Santa Maria ladies found their length to pull away in the second half of the game. Once again the game proved a real tussle between two leads on top form, with Mary just edging it.

The Santa Maria pair had comfortably defeated a La Posada team of Jane Hughes and Caroline Hogarth in one semi final, while a Lauro pairing of Heather Mainwaring and Margaret Woodin lost in a nail biting finish against Saydo. Going into the last end leading 11-10 Pat drew an almost perfect shot which neither of the Lauro pair could beat.

The FAB Chairman Ron Jones presented the prizes in front of a large crowd of spectators that had braved the cold. He also thanked and congratulated La Posada Bowls Club and their members for hosting the Tournament, particularly Shelley Greenwood for her stirling help in running the Competition, the Umpires for giving up their time to control the event and the FAB Competition Secretary Robert Wright for his hard work.

A list of Previous winners can be found HERE