The Malaga Province Representative Team , colloquially known as Team Malaga, is the equivalent of a UK County side. Spain is split into Autonomous regions, which in turn are split into Provinces. The region of Andalucía plays bowls in 3 of its Provinces - Almeria, Huelva and Malaga. 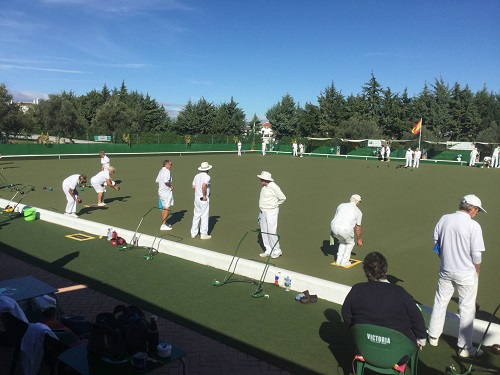 Provincial sides can only play official Matches against other Provincial sides. This limits our Matches somewhat as currently only Almeria and one of the Valencian Provinces have Provincial Sides.

Historically we have been very proud to play “friendly” Matches against the Spanish National side for many years, to give that side some much appreciated practice. Those matches have been tough and competitive for both sides, despite the “friendly” tag.

Matches against Spain have been 10 a side (with each having a squad of 12) for both Men’s and ladies Matches but the recently inaugurated Inter-Provincial Matches were 13 a side with a squad of up to 15 bowlers, again for both Men’s and Ladies matches. Matches are held over a 2 day period, with games taking place over 4 sessions. Team Malaga hold regular selection and training sessions throughout the season.


Clarification: Our season is October - April. Candidates should be resident in Malaga province for most of that period. Vacations / travel are of course permitted but the main place of residency for the season should be within the province.

The Almeria Province Team Manager has asked that an additional match be arranged for 2020, as his side are thoroughly enjoying the competetive matches. It has been agreed to play home and away fixtures each year.. The date of the Home fixture will be announced once it has been confirmed.

In addition we have begun talks at Regional Federation level to try to arrange matches against the Alicante Provincial teams from Valencia. Both we Almeria and ourselves are keen to add this fixture in the future.